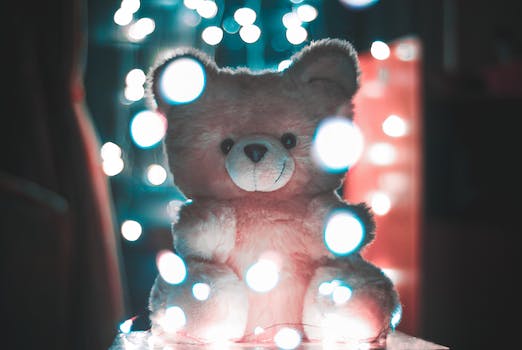 Teddy Bears have been around for over 100 years, but that doesn’t stop designers and inventors from creating wacky new methods of using, altering, or (in some cases) destroying them!
From the innovative to the kitsch, the world of Teddy Bears is filled with inventive new ideas, ranging from the wonderfully touching, to the downright weird!

Surprisingly, this isn’t a joke! This Japanese ‘toy’ has actually been designed to make life simpler at your wedding! Rather than throwing confetti at the bride and groom, the Japanese go one step further and throw Teddy Bears!

Naturally, someone somewhere in Japan realised that this convention could be made a whole lot easier if they had a gun to ‘throw’ the Teddy Bears for them, and so created the Teddy Bear Gun.
This contraption– produced by Japanese paintball gun manufacturers, Sunamiya– utilises the science behind their paintball guns to thrust the Teddy Bear via a transparent barrel, high into the air with a simple ‘click’ of the trigger.

Luckily, no Teddy Bears are injured with the use of such a contraption as each bear is fitted with their miniature parachute, so that they glide safely and gracefully back down to Earth to wish the bride and groom well on their journey.

That’s right, a data-storing Teddy Bear! At a first glance this is just a normal, cute Teddy Bear, but once you pull off its head (Yes, you are required to decapitate this poor Teddy Bear!) , it becomes a USB memory stick, with the head acting as the cap.
When plugged in, it seems as though the Teddy Bear has been sucked into your PC! Poor thing. Perhaps someone had a score to settle? We’re not too sure if, or even if these Teddy Bears will come on to the market. So if you don’t feel like waiting to learn, it can’t be that difficult to pull apart one of your much loved cuddly toys…

The ‘Huggable’ Teddy Bear certainly fits into our ‘wonderful’ category!

This Teddy Bear is being developed to serve as a robotic companion for the sick, elderly or infirm that are unable to enjoy the existence of actual animals, and the benefits this can bring. The thought of the ‘Huggable’ was born after clinical trials demonstrated that animals can decrease stress levels in patients, but some- due to allergies or local restrictions- are not able, or allowed to get access to these animals.

Making use of the latest sensate-skin technology, cameras from the eyes, microphones in the ears, wireless technology and data collection techniques, the Teddy Bear has been designed to react to touch in how a real animal would, and then communicate in a suitable manner.

The objective is to provide a very helpful tool for care providers that’s emotionally pleasing and provides real, measurable health benefits to patients. This must be the most advanced, forward thinking, technologically packed Teddy Bear we’ve ever seen!

Appealing to Teddy Bear lovers all over the world, a nifty little Teddy Bear MP3 player, capable of storing 128mb of sound, with a USB connection, and a liberal $78 price tag, seems set to become one of the most useful and practical Teddy Bears available, without compromising on cuteness.
Created by Tomy, and weighing in at only 50g (excluding battery), this fairly retro looking product will provide you around 8 hours of playback from one AA battery!

As soft and as reassuring as a ‘real’ Teddy Bear, this eccentric Teddy Bear Chair was designed by furniture designer Matti Klenell. Perfect for any Teddy Bear lover searching for something completely different to furnish their home, ‘Mido’ is an upholstered Easy Chair, shaped like a Teddy Bear, initially displayed at the Agate Gallery, Stockholm as part of an impressive solo exhibition.

No, this is not the latest military job, but a Teddy Bear fitted with the latest and most advanced technology. The Teddy Bear is being designed to respond to the Teddy Bear’s owners’ voice, movements and even facial expressions!

With Microsoft showcasing a high tech Spy Robot Teddy Bear at the TechFest trade fair, the stage looks set for additional investment and development into intelligent Teddy Bears capable of recording moments of your child’s day, reading them a book, and even connecting to a parent’s system in a distant location to allow them to ‘schedule a repertoire for a kid’. The options seem endless!

Originally, this Teddy Bear was designed to plainly track somebody’s movement around a room, but since then, the whole project has exploded, and future strategies to the Teddy Bear will take this toy to an amazing level of sophistication.

This may be the strangest and most disturbing Teddy Bear I’ve ever come across, and slots into our ‘weird’ category flawlessly!

Called the somewhat reassuring ‘TeddyBearBand’, this ‘cuddly toy’ was surprisingly designed by Philippe Starck who asserts that ‘an overabundance of toys fosters infidelity’ in children, leading him to create this sort of hybrid of Teddy Bears/soft toys which apparently meets all of a child’s needs!

With this Teddy Bear having a bunny for a hand, and a puppy for a foot, it packs more animals to a cuddly toy compared to the average Teddy Bear, but I’m worried about the dreams I will be having tonight after seeing this thing, let along the effect it will have on a young child.

This slightly odd-looking Teddy Bear, designed by the designer Leah Culver, doubles up as an all-purpose remote controller.

While maintaining it’s softness and child-like allure, this Teddy Bear makes a surprisingly powerful, fully functional remote control. Squeeze the Teddy Bear’s chest to play/pause your program or film, and change the volume with a gentle pinch of this ear.

We really enjoy this one! Slightly weird, but also somewhat wonderful!

This cheeky but fun GPS-fitted Teddy Bear (Navirobo) sits on your dash and directs you to your destination. But heaven forbid if you take a wrong turn, for your cuddly companion– who does a little jig when you finally reach your destination– will mock you!

This is a terrific, laugh-out-loud Teddy Bear, designed and manufactured in (you guessed it!) Japan, will be a great addition to your dashboard which will make your long journeys home far less tedious!

When Barney the guard dog went on a rampage in Wookey Hole Caves, it was no ordinary Teddy Bear that became one of her victims

Mabel, made in Germany in 1909, who formerly belonged to none other than the King himself– Elvis Presley– lay mortally wounded, surrounded by the remains of nearly a hundred rare Teddy Bears, ruined by the foul-tempered Doberman Pinscher.

The Teddy Bears were on loan at the time of the attack, displayed at Wookey Hole Caves, Somerset. Mabel– purchased for $40,000 by Sir Benjamin Slade, an avid collector of Elvis memorabilia– was, not-surprisingly, the star attraction.
Barney, who was supposed to be guarding the Teddy Bear collection, worth over #400,000 was wrestled to the floor among the remains of the Teddy Bears, with “Heads pulled off, arms, arms and there, it was a whole carnage really. I’ve never seen such a mess, there was stuffing, fluff and bear bits everywhere.”

Can our Teddy Bears have feelings too?

With so many weird and great things happening in the Teddy Bear world, it makes you wonder whether our cuddly friends have emotions and feelings of their own. What would they think of the crazy ideas we have for Teddy Bears? Can they come awake at night and remember our moments of cruelty?

Perhaps it is sometimes true that we form connections with all the inanimate objects that we surround ourselves with and finally humanise our Teddy Bears, and by doing this, we start treating them like they have human emotions- pain, fear, Cocoa Beach Wildlife Removal, love. In any case, here at Funky Bears, we’re sure the crazy Teddy Bear creations will continue, and we can not wait to see the next weird or wonderful thoughts that people in the same industry as ourselves will produce!